Pest control is very important in the sustainable development of agriculture, and the ways to control pest damage are chemical control, artificial control and biological control. Chemical control is mainly to directly control or eliminate pests through chemical agents, which is fast and efficient. However, the use of pesticides has also resulted in a series of problems such as increasing pest resistance, destroying ecological balance, and polluting the environment. The artificial pest control is the most primitive control method, with poor effect, high cost, time-consuming and labor-intensive. Therefore, the safe, efficient and non-polluting biological control techniques are gaining more and more attention. 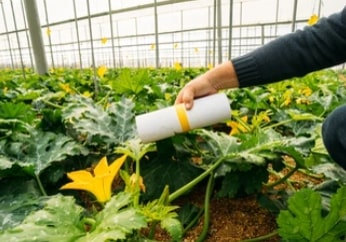 Biological control refers to the use of the characteristics or mutual restraint relationship between organisms to achieve control effects. Common biological pest control methods include the use of natural enemies of pests against pests such as creating suitable conditions for natural enemies, insecticides of biological origin, insect hormones (sex attractants), pathogenic microorganisms (bacteria, fungi), and insect or plant growth regulators (synthetic chlorfluazuron, buprofezin).

Insect pheromones extracted artificially or simulated synthetically can be used to interfere with communication between pests for the purpose of exterminating them. The main insect pheromones used in biological control of pests are aggregation pheromones, alarm pheromones and sex pheromones.

Aggregation pheromones can lure pests together for extermination, while alarm pheromones are used to repel pests by inducing defensive or dispersal behavior of similar individuals.

Sex pheromones are chemical substances that are secreted in vitro by the special secretory organs of individual insects, which can be received by the receptors of individuals of the same heterosexual species and cause certain behavioral responses or physiological effects in individuals. Sex pheromones can prevent male insects from mating, and can also reduce the number of pests by concentrating male pests in traps. Mass-trapping and mating disruption with sex pheromones have been commonly used in pest control.

Set an appropriate number of traps in the control area and use sex pheromones to lure insects to mate. The male insects appearing in the field to mate will be concentrated and trapped, so that the female insects will lose the opportunity to mate and cannot effectively reproduce offspring, thus reducing the population density of the next generation. Gathering pheromones and plant-derived attractants can also be applied to trap a large number of adult insects to reduce the number of insect populations and pests damage.

Sex pheromones are mainly used to interfere with the transmission of information between insects to reduce the chance of pests mating. The dispensers can be used in the field to release sex pheromones, then the concentration in the atmosphere might be so high that male insects become dizzy and unable to find females for mating. The high concentrations of sex pheromones may also paralyze the tentacles of males and deprive them of the ability to respond to calls from females, thereby reducing the birth of the next generation of pests to lower populations.

At present, the use of sex lures to control Grapholita molesta, Parathrene tabaniformis and other pests have achieved better control results.

Alfa Chemistry has been mainly focusing on research and development of insect pheromones. We provide high quality insect pheromone chemicals and related services. If you do not find the product you need in the catalog, please contact us, we are happy to provide you with more detailed services.