Pheromone is a general term for compounds that play a role in chemical communication between organisms. Insect pheromone is the chemical molecular language of insect communication. It mainly refers to the trace chemical substances secreted by insects that can induce specific individuals to copulate, that is, sex pheromone. Insect pheromone has a high degree of specificity. Each pheromone has a specific chemical structure, and most pheromones are a mixture of several compounds in a certain proportion. So far, thousands of synthetic pheromones have been commercialized, and they are widely used in the fields of insect trapping, insect forecasting, and pesticide research and development. In addition, a deceptive predation behavior of animal species is also related to insect pheromones. For example, spiders can secrete a substance similar to pheromones to induce corresponding insects to throw themselves into the net. The structure of insect pheromone is mostly long-chain alkanes, and the functional groups mainly include hydroxyl, ester, carbon, and ethylenic bonds. Aldehyde-functionalized pheromone can be obtained by reducing acid compounds, which are mainly sex pheromone, ritatin and tracer. They are widely used in the development of biological pesticides, trapping and fascination of pests, tracking of insect traces, etc. 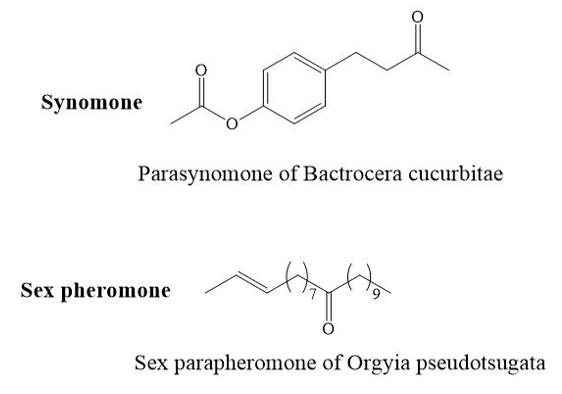